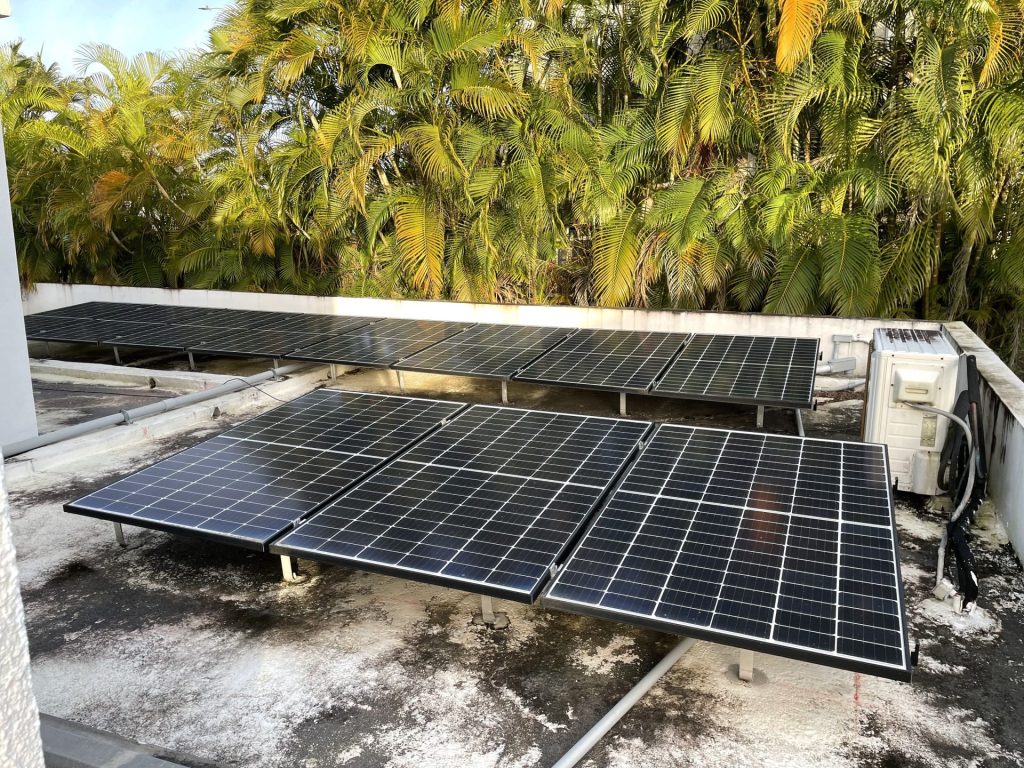 Solar panels installed on the roof of a house in Guaynabo, Puerto Rico. EFE/Marina Villen

San Juan, (EFE).- Solar panels and power generators have become essential for the people of Puerto Rico due to frequent blackouts and occasional long-term blackouts, like the current one caused by Hurricane Fiona.

They are part of the urban and rural landscape, because the fragility of the power grid is a fact. It has been plagued by problems for a long time and has not recovered from 2017’s Hurricane Maria, which completely destroyed it, leaving several areas of the island in darkness for months.

“The country’s energy system is very vulnerable, we just went through such a situation five years ago, but more seriously (Hurricane Maria) when the system went completely underground and it has become difficult to raise it,” Luis told Efe. Coto, responsible for a 24-hour supermarket in a metropolitan area.

Their supermarket has a powerful electricity generator located on the roof of the building, to which they connect everything from refrigerators to air conditioners.

“Thanks to the generators, the company can continue to function and operate and provide service to the community,” explains Coto, who stresses that Puerto Rico needs to be “ready” with generators or renewable energy systems.

From the roof of the supermarket, it appears that the surrounding restaurants and houses also have generators. They are seen and heard, they do not go unnoticed, the noise of these devices is deafening.

There are many types. From the giant plants that power all the houses in the island’s most luxurious apartment buildings, called condominiums, even though they are the fewest on the island, to small ones for single-family homes.

Other buildings have generators for common areas, some have outlets in the hallway so that residents of different apartments can plug into an extension cord to at least power the refrigerator and charge cell phones.

They run on fuel that emits gas and creates pipelines at gas stations and stress over possible shortages of petrol and diesel on the island or problems with its distribution, as happened this week after Fiona.

In addition, they also come with dangers. Firefighters have responded to dozens of generator-related emergencies in recent days, some of which have resulted in deaths, such as a man whose device exploded while handling it or another who died of intoxication after inhaling the gas.

Given the inconvenience of generators, more and more families are opting for renewable energy, such as the family of Hiram Arroyo, professor of health promotion at the University of Puerto Rico, who installed thirty solar panels on their house a year ago. pandemic.

“In the last five years, my generation has seen the need to invest in solar panels because of events and natural crises in the country, including hurricanes,” Arroyo explains to Efe.

The academician, who suffers from “daily service interruptions”, also points out “shortcomings of public electricity systems” and the performance of the private company LUMA Energy as another factor.

Arroyo decided to lease the tiles, paying a monthly amount based on their consumption. Another option would have been to buy them for somewhere between $20,000 and $30,000.

The benefits of solar energy are “tangible”. After Hurricane Fiona, he says, his roof has had “the basic services of a fridge and other solar-powered household appliances”.

In addition to technology, there are people who need electricity because of their health problems. This is the case of Arroyo’s mother, who needs oxygen to sleep and has a generator for it.

These blackouts are not only caused by hurricanes, but also by malfunctions, such as last April’s incident at a plant that left the entire island in darkness for several days, fueling discontent with LUMA Energy, which took over the distribution and transmission of electricity. in June 2021.

There have been frequent protests against this company, as well as calls to terminate the contract with it due to both power outages and seven increases in electricity bills in one year.

LUMA President Wayne Stensby said in the spring that the company is well prepared for the 2022 hurricane season. A few words that remain questionable due to Fiona’s general blackout and slow service restoration.