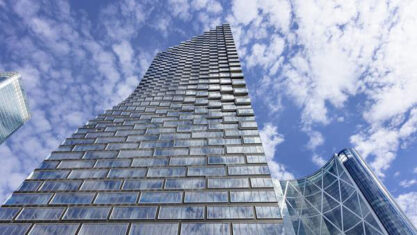 Telus has opened its new headquarters in Calgary.

The $400 million development has 326 rental homes and the largest public art display in the country.

In a press release, Telus says the building is “one of the most technologically innovative and environmentally-friendly sites in North America,” building on its goal to utilize 100 percent renewable energy by 2025.

The building contains a stormwater management system that reuses rainwater for washrooms and a thermal energy system that transports hot water underground. The two features reduce the demand for municipal water and heating energy.

“We are exceedingly proud that Telus Sky will continue to build a friendly future for everyone who lives, works, and serves in the great City of Calgary,”  Darren Entwistle, Telus’ president, said.

The project has been in development for the past nine years, and Telus says it has supported more than 1,000 jobs in the local economy. The company plans on adding another 8,500 jobs in the province through a $17 billion investment in network infrastructure, operations, and spectrum.