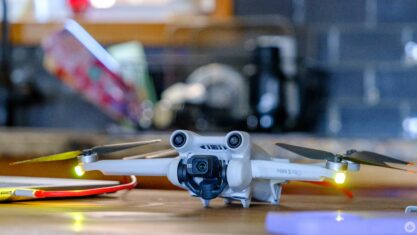 DJI’s Mini 3 Pro offers several improvements over its predecessors, but the feature that impresses me the most is the fact that the drone can fly on its own.

DJI has loaded the Mini 3 Pro with its ‘Active Track’ technology. This means that all you need to do is make sure the drone is a few metres off the ground, draw a box around yourself with the touch screen on the controller and select ‘Active Track.’

Once the feature is engaged, the drone follows you around like a little flying dog out for a leisurely walk, while still recording video like a live security camera. I had the most success with what I’d call the “standard video game character angle.” Since the drone travels forward from this angle, it’s able to use its front-facing sensors to avoid most obstacles.

It’s when the DJI Pro 3 is filming sideways that issues occur. Since there are no side-mounted sensors, the drone flies blind and crashes into things more frequently. In one situation while flying in a relatively open park area, the drone hit a lamp post with a circumference of only four inches.

Overall, if you’re careful with the DJI Pro 3, it can capture amazing footage of people, cars and pets without requiring direct control over it. This is a great feature for anyone who needs to film themselves alone.

Watch my review of the DJI Pro 3 (below), or find the written version here.