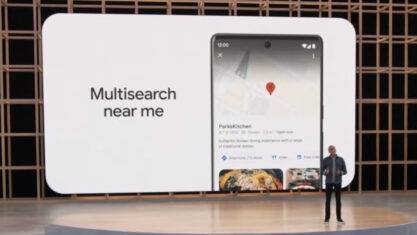 Google Search is offering a new feature in the Google app called ‘multisearch.’ With the functionality, you’ll be able to take a picture of things like apparel, home goods and food, or screenshot the Google Search bar and then add the words “near me.’ Then Search will show options for a local restaurant or retailers that have it available.

Google will scan millions of images, reviews, web pages and more from the community of Maps contributors to find more about these nearby spots.

This feature will be available later this year in English and will expand to more languages in the future.

Google is also working on a new scene exploration feature. When you’re in a book store, for example, and you’re looking at a wall of books, you’ll be able to snap pictures and search for the exact book you’re looking for.

This technology won’t be available for a while, according to the tech giant.

The post Google’s ‘Multisearch’ feature can help you find things nearby appeared first on CableFreeTV.