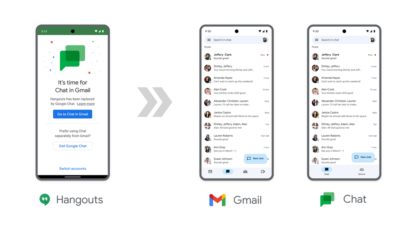 About a week ago, Google accelerated the phasing out of Hangouts in favour of Chats by promoting users to upgrade to Chat in Gmail or the Chat app.

Now, it appears as though Google is in the midst of shutting down Hangouts for free users on both iOS and Android.

As reported by 9to5Google, the app’s old versions, which have been “mostly unavailable” to download on Google Play and the App Store, are the ones that are being shut down first. Launching Hangouts shows an “It’s time for Chat in Gmail,” and once you see this screen, you can no longer access classic Hangouts on mobile.

In addition to the mobile app, Google is also phasing out the Hangouts Chrome extension and the Hangout extension in the Gmail sidebar. That being said, users would still be able to use the dedicated hangouts.google.com website until it is ultimately killed off in November 2022.