Beyond Meat has some new star power behind its plant-based meat brand in Kim Kardashian.

The entrepreneur and influencer extraordinaire came on as the company’s first “chief taste consultant” and will be featured in a new campaign touting her recipes for using Beyond Meat and other creative content. 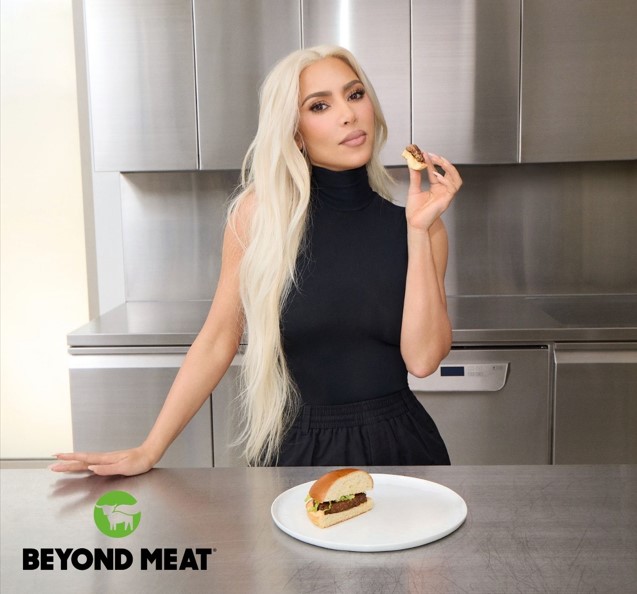 “I’ve been focusing on going more plant-based and can tell you that Beyond Meat is my absolute favorite — I love how all their products not only taste amazing but are also good for me and my family,” Kardashian said in a statement. “As my fans know, my fridge and freezer are fully stocked with Beyond Meat’s products and I’m so thrilled to be featured in the campaign as its chief taste consultant to inspire people to include Beyond Meat in their diets.”

Bloomberg reported that news of this sent the company’s shares up as much as 7% Tuesday to $26.56 before going back down to close for the day at $22.94 per share. It is also looking to be a way to help the company reverse some of its slowdown in growth, according to recent earnings reports. In Kardashian, the company also gains a powerful ally who is familiar with working with billion-dollar brands and gaining exposure.

A Beyond Meat spokesperson said via email that after seeing Kardashian as a brand fan over the past few years, it made sense to create the consultant role.

“We love her authentic and genuine connection to the brand,” the spokesperson said. “As an icon synonymous with impeccable taste in food, fashion, beauty and more, Kim will highlight the brand’s delicious, nutritious and sustainable product portfolio with her signature recipes and engaging creative content.”

The company’s growth struggle comes as the food tech industry itself is seeing a bit of a slowdown. PitchBook’s first quarter “Foodtech Report” noted that both the number of venture deals (359) and dollars invested ($6.9 billion) were down from the first quarter of 2021.

Speaking to that slowdown and how it will get the momentum back, the Beyond Meat spokesperson said, “As with any relatively nascent industry and category disruptor, there are going to be short-term fluctuations, but we believe the underlying fundamentals that have driven growth in the category over the last couple of years are still in place.”

Kardashian is just one among a team of celebrities touting the plant-based meat company, which includes Kevin Hart, Shay Mitchell and Snoop Dogg.

Kardashian is not the first to take on a role like this. In 2019, model Emily Ratajkowski, who has a clothing line, was named “chief taste officer” of BABE, a sparkling canned wine brand. And today, Just Egg announced that both Jake Gyllenhaal and Serena Williams invested in the healthier egg brand and are part of a new campaign.

The post Kim Kardashian lends her taste buds to Beyond Meat as first chief taste consultant appeared first on CableFreeTV.