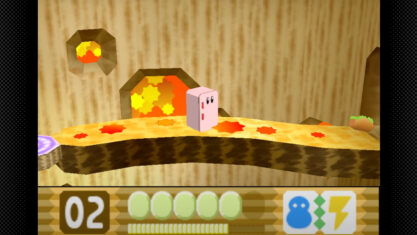 Nintendo vows to fix a bug found in Kirby 64: The Crystal Shards, available now on Nintendo’s Switch Online + Expansion Pack subscription. A patch is due later next week. However, the narrative that Nintendo’s emulation needs further polish continues.

In a Twitter post, Nintendo of America acknowledges a bug the player base found in Kirby 64: The Crystal Shards. According to reports, the bug affects the ability of players to move if hit by certain enemies or items during underwater stages. Currently, the only fix is to exit the level and restart. “A patch will be released early next week to fix this,” Nintendo of America claims.

A bug has been found in #Kirby 64: The Crystal Shards for Nintendo 64 – Nintendo Switch Online that can prevent players from progressing under a certain condition. A patch will be released early next week to fix this. We apologize for the inconvenience.

Funny enough, this particular issue only exists within the Switch Online + Expansion Pack emulated version. Players plagued by the issue do not recall it being in the original game on Nintendo 64 nor the ports to Wii and WiiU via the Virtua Console.

This isn’t the first time players have experienced issues with the emulated versions of games available on the Nintendo Switch Online. Players have reported crashes, lag, and other hurdles while playing games like Paper Mario and Banjo-Kazooie. It appears as though this is a persistent issue Nintendo has as it expands its line of classic games on its subscription service.

Emulation struggles persist across the industry. Nintendo’s struggles continue all the same but Sony faced serious hiccups as well. Similarly, PlayStation Now offers classic PlayStation titles to stream. Input lag and an assortment of other annoying problems affected the experience. Sony is now rolling PlayStation Now into its revamped PlayStation Plus service with new tiers, available next month in Canada.

For Nintendo, the emulation problem stings as this is the only way to play classic games on Nintendo Switch. With no Virtual Console, Nintendo only supports an eclectic catalogue of games across the NES, SNES, and N64 generations. Most recently, Nintendo added Congo’s Caper, Pinball, and Rival Turf, three games spanning the NES and SNES eras.

Source: @NintendoAmerica Via: The Verge