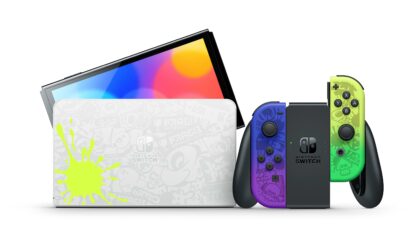 It includes one blue and one yellow gradient Joy-Con, while the Switch tablet itself sports a white underbelly. Splatoon-themed graffiti is layered throughout the Joy-Cons and console’s rear, as well as the white Switch dock.

The Nintendo Switch – OLED Model Splatoon 3 Edition will launch in Canada on August 26th at a cost of $469 CAD, which is slightly more than the $449 standard OLED Switch. In addition to functioning exactly like a standard Switch, the OLED model features a bigger, more vibrant 7-inch OLED screen, wide adjustable stand and enhanced audio. Read more in our review.

Notably, the Splatoon OLED Switch will drop just a couple of weeks before the September 9th launch of Splatoon 3. The squid-focused third-person shooter will feature a single-player campaign on top of various multiplayer modes, including 4v4 ‘Turf War’ and the co-op ‘Salmon Run.’