Only a handful of “whales,” or big spenders, still own the majority of NFTs. While the digital assets have piqued widespread consumer interest, the user experience associated with actually minting or purchasing an NFT is still complex and oftentimes intimidating.

DJ Gabeau, one of Snapchat’s earliest engineers and founder of web3 social network Primitives, told TechCrunch that he thinks NFTs can be a genuinely enjoyable way for people to connect with one another digitally and make memories. Still, Gabeau acknowledged that most NFTs are too expensive, complicated, or scammy to appeal to a broad audience today.

Gabeau, who previously worked as an investor at Union Square Ventures backing startups at the intersection of crypto and climate, said he first started using the Solana blockchain last summer. He started putting together a thesis around NFTs and social networks while visiting Amsterdam, where he had a chance to closely observe how social networks formed in person at art galleries, restaurants, and parties around a shared interest in Solana.

Despite his own interest in web3, he said he was disappointed by many of the existing use cases for NFTs at the time because they tended to center around inaccessible, ultra-expensive profile picture (PFP) projects. That’s when he saw the opportunity to build a social network where users could connect through NFTs on the Solana blockchain, which is much more cost-efficient and inexpensive than Ethereum.

“It was very clear to me that social networks spring up, and a lot of them are not tangible, but they are real. I got excited by connecting these networks through NFTs, because if people hold on to the same asset, as you’ve seen on Ethereum, they will build around it if you make that an easy thing to do,” Gabeau said.

He showed the thesis to an investor friend at Redpoint, and that conversation ended up being the first step in raising capital for Primitives. The startup came out of stealth today and announced it had raised a $4M seed round led by Redpoint with participation from Union Square Ventures, Harlem Capital, Stellation Capital, and others.

“Primitives is unlike any other NFT platform on the market and with David’s background in social networking, the company has the opportunity to make the adoption of NFTs uncomplicated and fun,” Nick Grossman, an investor at Union Square Ventures who backed the startup, said in an email to TechCrunch.

Primitives is designed to be easy to use, Gabeau said. Users of the app can create their own customizable NFT-based avatars called Primojis, which resemble something like doodled sketches of emojis. They are then encouraged to share those Primojis via text message with friends, who “claim” those NFTs upon joining the network and get to create their own, setting off a cycle.

Users can also collect NFTs based on “moments, which are tied to their attendance at specific events or locations, Gabeau said. Their NFTs are stored in a Primitives digital wallet, which Primitives has built using a white-label API. The wallet can hold NFTs for a user that they acquired outside of Primitives, he explained.

Creating and sharing a Primoji is free for users because Primitives buys smart contracts to mint the NFTs in advance, Gabeau said. Users don’t have to go through multiple steps to claim the assets, he added. Like many social media platforms that are free to use, the company plans to make money primarily through sharing user data with advertisers, according to Gabeau. Gabeau likened Primojis to Snapchat filters, which brands often use as a means to advertise. 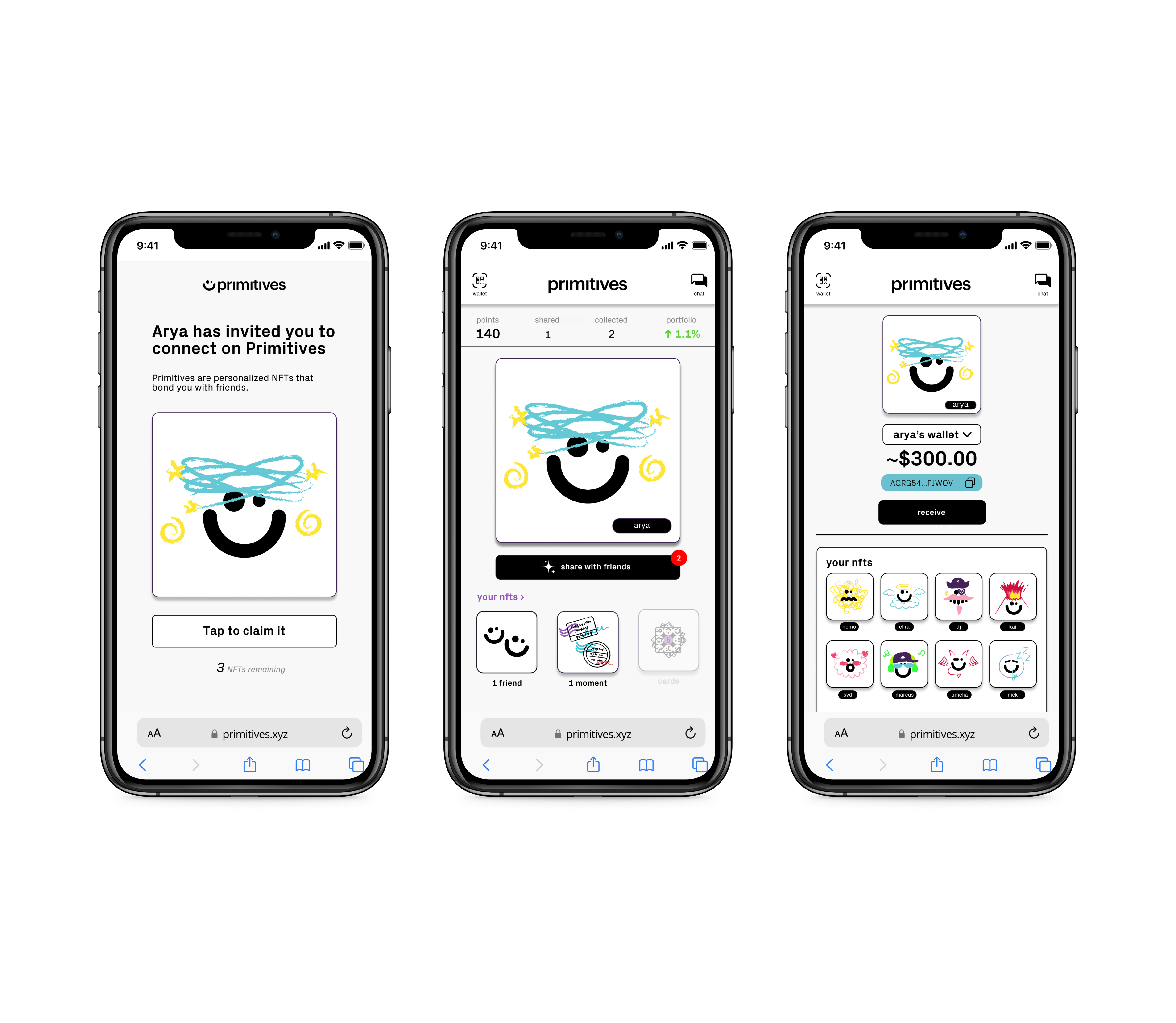 Primitives’ ultimate goal is for the digital wallet to become a central location for a user to hold NFTs and cryptocurrencies, interact with friends, store music, play games, and more, Gabeau said. He imagines a future where “your data, links, and content all live together in your personal crypto wallet,” similar to how people use mobile phones today.

The company, which currently has 9 employees, is working on adding features including integration with Ethereum wallets and peer-to-peer messaging through wallets, according to Gabeau. He also envisions an active secondary market on the Primitives platform itself, which would allow Primitives to earn money from royalties each time an NFT changes hands.

Primitives is currently in beta mode with plans to launch publicly as soon as next month, Gabeau said. As for monetization, he said Primitives isn’t focused on courting brand partners just yet.

“Our goal is to be focused on friends, and the brands will come with that,” Gabeau said.

The post Primitives wants to turn your crypto wallet into a social network appeared first on CableFreeTV.