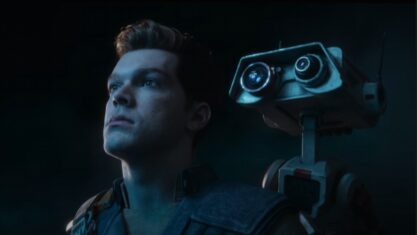 As part of the formal announcement of the sequel, Respawn released a brand new cinematic trailer, setting the tone of Star Wars Jedi: Survivor. In it, we see Cal Kestis continue to evade the Empire. As one of the few remaining Jedi after Order 66, Kestis and his companion BD-1 roam the galaxy and find new allies along the way.

The trailer continues to show off new inquisitors, who are tracking Kestis along with other remaining Jedi. We also see that Kestis’ lightsaber has fallen into the hands of the inquisitors after a recent fight gone wrong. The nefarious figure then asks, “What’s your next move, Jedi.” Most interesting is we see Kestis and BD-1 overlooking what appears to be a bacta tank where an injured individual lays in rest.

Respawn confirms that Star Wars Jedi: Survivor is a current-gen only. It’s intended to launch on PC, PlayStation 5, and Xbox Series X/S in 2023. No specific window is given by EA nor Respawn.

Fans praise Star Wars Jedi: Fallen Order for its soulsborne-light mechanics and combat. It featured Metroidvania puzzle-solving and a plethora of force abilities to unlock. It became a stand-out Star Wars game in recent years.

The official reveals of Star Wars Jedi: Survivor was just one of the highlights of Star Wars Celebration. During the event, Disney and LucasFilm debuted a new trailer for the Disney+ series Andor, along with its August 31st premiere. Two episodes of the Obi-Wan Kenobi series also debuted on Disney+.

LucasFilm also confirms that The Mandalorian Season 3 streams this February. Ahsoka, and another live-action series, Skeleton Crew, begin airing on Disney+ in 2023 as well.